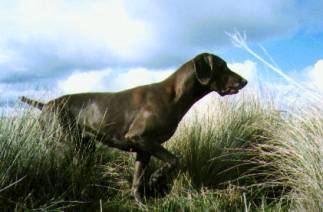 Hayleigh was obtained from Russell Benson and was my first serious attempt at field training - as her breeding suggested, she may be a suitable type.  Consequently many, many hours were spent following this small liver pup around many acres of the country, shooting hundreds of birds and rabbits.

Being a novice myself, I was forever hopeful she may be special, but I was not in a position to foresee the future. I spent many hours after dark, talking to people like Gus Stephens, Ian Ramsdell, Mal Park and Laurie Phelan, and then, the next time shooting, putting into practice information received

By the time Hayleigh was two years old she-had been to two duck Openings, and had literally had hundreds of rabbits and a thousand quail shot over her. Something that had become very clear by everyone that had shot over her, more than anything else, was her fierce desire to find game.  She was a relentless pursuer of quarry, even when the paddocks were sparse of cover and scare of game, she would work relentlessly to bring the game to gun.  Her ability to bring the game to flush was quite incredible - both in the speed and accuracy of locating the game.

Hayleigh had three of the necessary ingredients needed for success as a field dog - desire, temperament and the opportunity.

Hayleigh took me to four States, introducing me to many people who would become good friends, obsessed by the some common denominator - birds, dogs and birds.

You can't buy them and you can't breed them, and they don't just happen.  I believe they occur through a chain of events assisted by their trainers, and as Charlie Ball once said 'you can't put in what nature left out'.

No doubt there will be dogs better, and dogs not as good, but one thing is for sure - there will never be one exact/y the some!

In April 1990 Hayleigh had her one and only litter of pups to Tri Ch Fallohide Loki.

And so the process starts all over again ....

Hayleigh died on 1st December 1991 doing the very thing she lived for - retrieving ducks in the rice fields of New South Wales - the victim of a snakebite.  A real danger for hunting and retrieving type dogs, which is unavoidable if they are to be given the opportunity to prove their heritage.