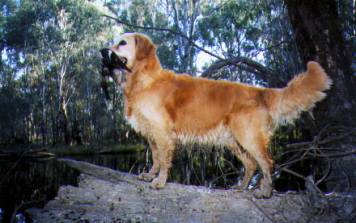 "Holly" became the first Golden Retriever bitch to gain her Dual Title in Victoria, having been awarded a Conformation title and a Retrieving title.

Holly gained her Companion Dog Title (CD) in 1989 at the age of two years.  Her show career did not start until that year when she won a large Intermediate Bitch class at the Golden Retriever Club of Victoria Championship Show in October 1989.  The judge was Mrs Gladys Crosbie from Scotland.In her critique Mrs Crosbie wrote:

"A very good bitch teaming with quality and type, she is very good fore and aft, short back and compact, scoring on her finishing outline - and what a picture on the move."

The period between March 1992 and April 1993 was certainly the busiest in Holly's career.  She returned to competition in conformation, field and retrieving after her first litter of puppies was born in September 1991. In March 1992 she gained her conformation title.  During the winter season of field trials she was Runner Up at the Victorian Gundog Club Novice Field Trial.  In September of that year she was awarded Best of Breed at the Royal Melbourne Show judged by Mr Ramon Podesta of Chile whose comments were:          "Typical, well balanced, very good movement, very sound, nice head.  "

In November 1992 Holly won her first All Age Stake at the German Shorthaired Pointer Club Retrieving Trial.  This was the first step to gaining her Dual Title.  This win also gave Holly her Restricted Retrieving Dog Award (RRD).  At the All Age level Holly showed consistency, coming second five times, but one last win was all that Steve and Holly needed.  As the trial season in Victoria was coming to an end and as Holly had already been mated for a repeat of her first litter, Steve opted to enter some Tasmanian trials.  Here, at last, at the Tasmanian Gundog Trial Association in April 1993, Holly won her second All Age Stake and gained the Title of Retrieving Champion.

She then took a break from competition to concentrate on her maternal duties once again and then look forward to competing in field trials in 1994!

Holly died on 31 August 1999 at the age of 12  after complications following surgery.

Waiting for Kim and Steve at the Rainbow Bridge